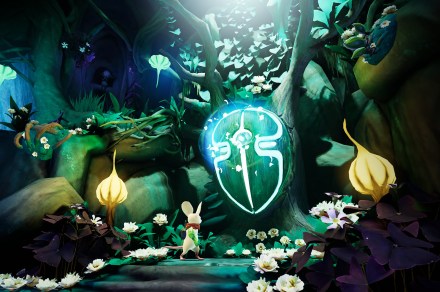 Released exclusively for PS VR earlier this year, Moss: Book II is a sequel to acclaimed VR hit Moss. Like its predecessor, it’s an action platformer where players travel around diorama-like levels as a tiny mouse.

With its jump to the Quest 2, developer Polyarc is refining the game for Meta’s more modern headset. Most importantly, the game has been tweaked to work with the Quest 2’s two-controller setup. Polyarc says it’s also generally refining the experience for more capable hardware.

“For this release, we didn’t just want to get Book II running on Quest 2 and call it a day, so we took our time diligently balancing all aspects of the game, across graphics and gameplay, with the end goal being a truly memorable experience,” Polyarc technical artist Tyler Walters says in a press release. “Throughout this process, we were regularly excited by the level of fidelity we were able to achieve on Quest 2, often finding ways to make the game look and play better than ever.”

While we were charmed by Moss: Book II in our review, we noted that the game was let down by the PS VR’s aging tech.  “I can’t wait for the PlayStation VR2. I expect it to be a day-one purchase for me,” I wrote at the time. “As I wait for an official release date, I think I’m going to hold on to games like Moss: Book II and return to them when I can get the most out of them.”

Players can currently put the game on their wish list through the Quest Store ahead of its July 21 launch.

PSVR 2’s Horizon Call Of The Mountain Has ‘Multiple Paths’

SpaceTech (Like Elon Musk’s SpaceX) Will Disrupt These 4 Industries

SpaceTech (Like Elon Musk's SpaceX) Will Disrupt These 4 Industries