The pharmaceutical company Pfizer, creator of one of the most effective vaccines against Covid-19, reached the list prepared by Boston Consulting Group (BCG), dominated by Big Tech.

Grow Your Business,
Not Your Inbox

This article was translated from our Spanish edition using AI technologies. Errors may exist due to this process.

Pfizer became the first pharmaceutical company to appear at the top of the Boston Consulting Group (BCG) ranking of the most innovative companies . The creators of one of the Most effective vaccines against Covid-19 reached the exclusive top 10 on the list, led by Apple , Google and Amazon .

Since 2005, BCG has published the 50 Most Innovative Companies ranking, led by Big Tech for the seventh consecutive year. First up is Apple , founded by Steve Jobs ; in the second position is Alphabet , Google’s parent company, and in the third place is Amazon of Jeff Bezos .

They are followed in order by Microsoft , Tesla , Samsung , IBM , Huawei and Sony . In tenth place is the American Pfizer, the first in its field to appear within the top 10 positions of the table.

“More and more companies are driving innovation as one of their priorities, changing the way they set their goals and processes. The novelty is the irruption of the pharmaceutical companies ” , pointed Andrés Anavi , Managing Director and Partner of BCG for Argentina and Chile, quoted by El Financiero .

While Pfizer is the first drugmaker to make the top 10 in the ranking, it also includes Johnson & Johnson (number 20), Moderna (number 42) and AstraZeneca (number 49). 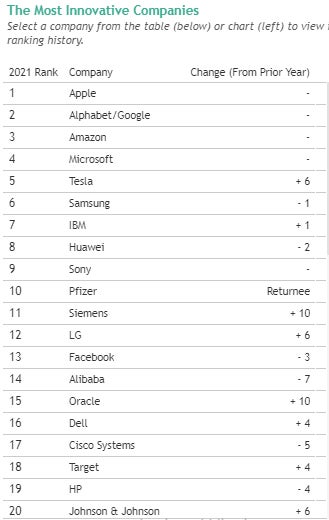 Image via The 50 Most Innovative Companies Over Time by BGG .

The Massachusetts-based consultancy noted that only 20% of companies implemented high-performance innovation systems to achieve their goals.

In this sense, companies that already have new platforms and practices incorporated are up to four times more likely to obtain income from new products, services and business models, compared to those that have not.

Another characteristic of the top 50 companies is that they promote greater ethnic and gender diversity in their leadership . Such is the case with Microsoft, Alibaba , Cisco Systems , Philips and Novartis , Anavi noted.

“We have been analyzing, for several years, the relationship between diversity and innovation,” explained the BCG executive.

“In the report, we asked the question of what comes first: diversity or innovation. To do this, we turn to data from past research and detect clear evidence that diversity drives innovation, and not the other way around, that innovation attracts diversity ” , he explained.

Anavi noted that the performance of the most innovative companies is also reflected in the profits they generated for shareholders .

“This profitability is maintained even if the tech giants are removed from the calculation: the main innovators outperformed the index by 13 percentage points ,” concludes Anavi with reference to the MSCI World Index , a US stock index of private equity funds, debt, stock markets and other tools that measure the financial evolution of markets worldwide.

Given that much momentum is still lacking in this field, the report indicates that more than 60% of companies plan to increase investment in innovation this year.