Usually, founders travel to meet investors in coastal cities. But in 2014, Steve Case and his team of investors began an annual bus tour, traveling to meet founders where they lived. It was the next step in a longstanding goal of Case’s; following his work as chairman and CEO of America Online, he’d founded an investment firm called Revolution, with an eye toward empowering entrepreneurs across the country — not just in clusters like Silicon Valley and New York. The bus tour, complete with a pitch competition, targeted places like Detroit, Chattanooga, and more.

“It was not clear what we’d find when we hit the road and rolled into town,” Case writes in his new book The Rise of the Rest, which shares the same name as the bus tour. But after more than eight years, over 11,000 miles of travel, and 40-plus city visits, Case is passionate about what they encountered: He describes a country full of thriving (or on-the-cusp) entrepreneurial ecosystems, and a radical shift in how and where companies are grown. Here, he explains why he believes the greatest innovations will now come from all over.

You make a bold prediction in the book. You write, “Over the next decade, a majority of the iconic startup companies, the ones that create tens of thousands of jobs and end up being worth billions of dollars will not be in Silicon Valley, but all across the country.” Why do you feel so confident about that?

Because we’ve seen it firsthand. If you look back 250 years ago, America itself was a startup. The country then led the way in the Industrial Revolution and the Agricultural Revolution and the Digital Revolution. And that enabled us to become the leading economic power in the world. That happened all across the country. That’s the history. It’s really more in the last several decades, when innovation became about software and coding, that Silicon Valley became where most of the money is, and so people left different parts of the country to go there.

That’s started to shift over the last decade or so. In a number of cities, momentum has built around startup communities, clustering people together, attracting more capital, slowing the brain drain of people leaving, accelerating the boomerang of people returning, and having these breakout tent-pole company successes. Then with a pandemic — obviously, it’s a tragedy in many respects, but one of the silver linings was that it led people to rethink their lives a little bit. It led to an unbundling of where you work and where you live and how you work and how you live. It broke the lock that Silicon Valley had on the innovation economy. Today, it’s really dozens of cities, not just a few, that are rising.

I’ve heard many people say that next wave of innovation will be in “boring” — but foundationally important — industries like, say, insurance or healthcare or transportation. There’s already a lot of expertise in these subjects outside of, say, Silicon Valley, right?

The sectors that you mentioned, you could call them boring — but I call them the largest industries in the world and some of the most important aspects of our lives. How do we get around? What do we eat? How do we stay healthy? Healthcare alone is around one-sixth of the economy. That’s where the puck is moving. That’s where the innovation will be in this next wave of the Internet. And there are certain cities where that domain expertise really advantages the startups in those places.

For instance, we’re seeing a lot of companies in the healthcare space move to where the big research hospitals are — building on that expertise, that legacy understanding of these businesses, which is going to become increasingly important. Because healthcare is not about the technology. It’s not about the software. That’s the table stakes. The real value is created by building partnerships with a lot of different organizations and hospitals, health plans, and others so they will adopt and integrate your technology. That requires the ability to form trust, and often that will come from the entrepreneurs in these cities that really understand those industries and are living side by side with some of the key partners that could really catapult their companies to greatness.

Related: Why an Entrepreneur’s Ability to Innovate Will Make (or Break) Future Success

Right, because particularly in specialized industries, people want to feel like they’re understood.

When we were in Chattanooga, we found a company called FreightWaves that built a data platform for the trucking and logistics industry. Well, I didn’t know this until we were there, but some of the biggest trucking companies in the country are headquartered in Chattanooga. Or, we invested in a company in Northwest Arkansas called AcreTrader that’s basically a platform to find investors to invest in farmland. The founder was in San Francisco but decided to move to Arkansas because they were trying to get farmers on the platform — and if you want to be credible and trusted in that industry, it’s better to be where there is a culture around farming. 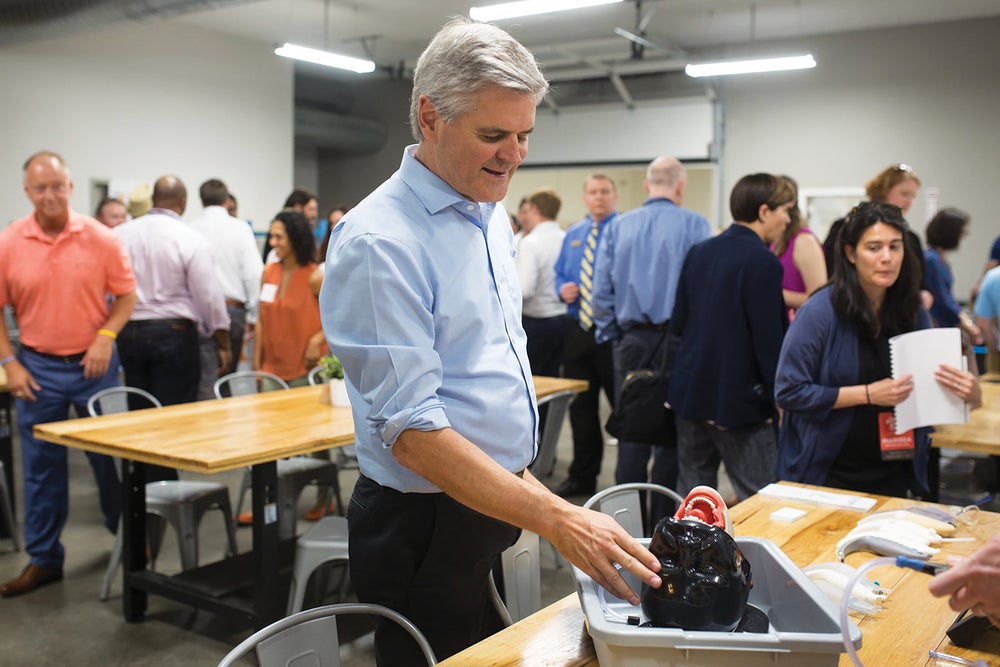 Many small cities are trying to build entrepreneurial ecosystems, which you describe as a wheel with seven spokes — startups, investors, universities, government, corporations, startup support organizations, and local media. But what’s required for all of this to truly succeed?

The first step is slowing that brain drain. Capital is a key part of that. But there’s some other, subtler aspects. You need to have a community. You’re seeing the creation of neighborhoods within a lot of cities where entrepreneurs tend to cluster, because it is helpful to bounce ideas off each other. It’s also important for local leaders to really spotlight and celebrate entrepreneurs.

We encourage entrepreneurs to focus on building their company, but also to figure out ways to drive more connectivity with more people in the community. That then helps maximize the likelihood of some of these companies being successful — creating those breakout successes that attract more capital and more talent.

What’s your advice for an entrepreneur who lives in a small city, and wants to help build their local ecosystem?

First of all, believe in yourself and your community. Entrepreneurship is about seeing the world in a different view, but it’s important to recognize that entrepreneurship is a team sport. So who else should be on your team to help take that idea and give it life? Then, recognize that it’s not just about you and your team and your company — you’re part of a broader community, so how do you make it easier for all the boats to rise?

Right now, the country is divided in part based on opportunity. A lot of people feel left out, left behind. How do we create a sense in their cities, in their communities, that they’re on the move and there really is hope and possibility?